A few months ago, I spoke to Carrie Rose — an SEO and PR wizard doing amazing things with her agency Rise at Seven.

During our chat, she said something that shook me up...

Carrie said, “Everyone thinks SEO is only a long-term play and produces results down the road, and that’s not true.”

And then she went on to share multiple examples that proved otherwise.

Then this weekend, my friends Krista Doyle and Jessica ________ put on a downright masterclass proving that SEO isn’t only a short-term play.

If you’ve spent even one minute on Twitter the last two weeks, you 100% saw the game Wordle on your feed.

It’s the viral game that was just acquired for $3M by The New York Times.

The referral loops is simple: 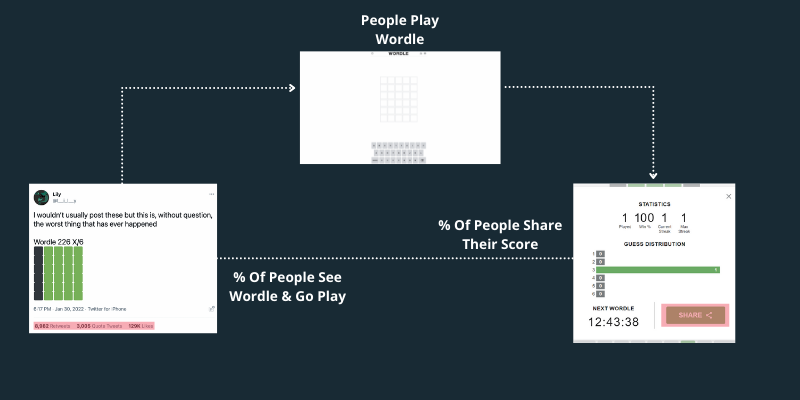 And unlike a regular tweet, Wordle prepopulates your tweet with a visual representation of the game and your score.

Which stands out in someone’s feed.

Okay, back to Krista and Jessica...

Well, they have this phenomenal podcast called The Holy Swift Podcast where they break down every Taylor Swift song.

On top of that, they have an exclusive community for listeners on Patreon for “Swifites” (Taylor Swift fans) who want even more Taylor Swift.

Because of that, they had an idea to recreate a Taylor Swift inspired Wordle, now called Taylordle.

Their initial thought was this would just be something fun for their listeners and community members...

So, In Less Than Two Days, Taylordle Came To Life. 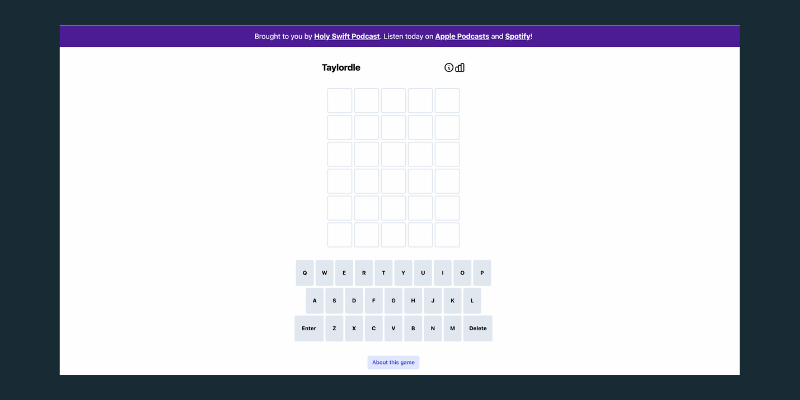 First, throughout the Taylor Swift community.

Secondly, every publication covered it.

Let’s Break Down Its Virality.

When I mentioned Carrie Rose, and why she says SEO can produce results fast, it's because the “secret sauce” is to create something that interjects your brand into something that is culturally relevant.

And you can do it fast.

So, instead of starting the conversation, you join the one people already have. And you become the center of it.

That’s exactly what Krista and Jessica did with Taylordle.

So, they created Taylordle specifically for Taylor Swift fans while Wordle is hot.

Not every brand can do this and have the same level of virality.

It’s working so well because Taylor Swift fans are a tight-knight community referred to as Swifties.

So, they took an already viral game and niched it down for a specific fan base with a very large reach. 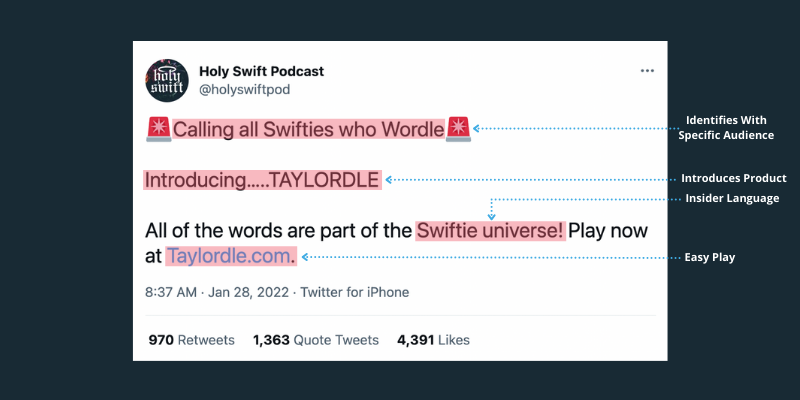 Which identified with a specific audience: Swifties.

And made playing easy: Taylordle.com

The result is 900K+ impressions. 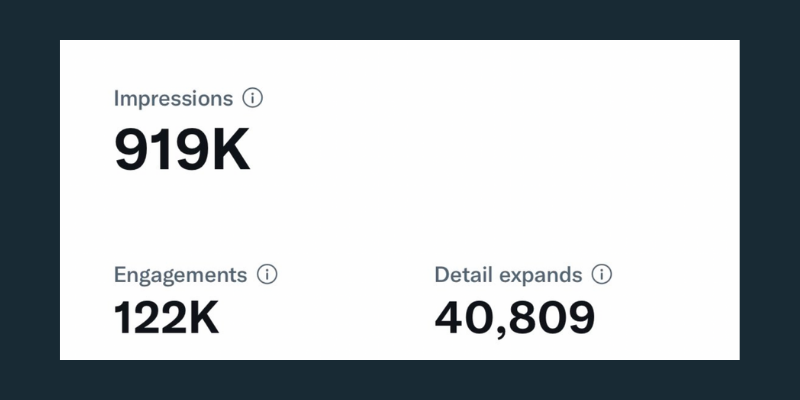 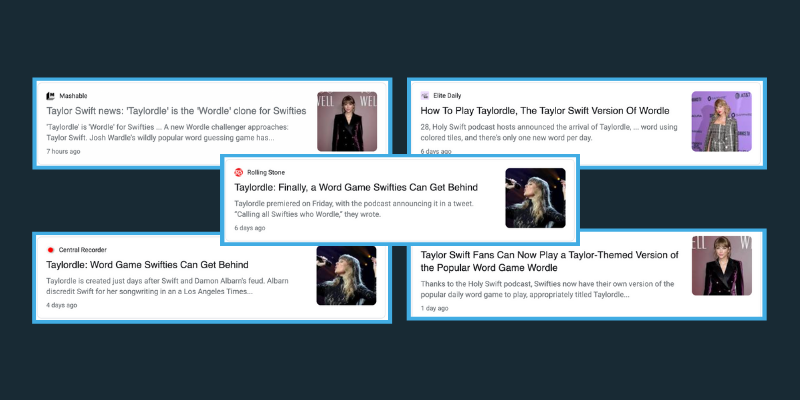 This organic virality via Twitter led to an insane amount of coverage from some of the world’s largest publications like The Rolling Stones, The Elite Daily, and Mashable.

And according to Ahrefs, 186 backlinks and 134 referring domains in less than a week. 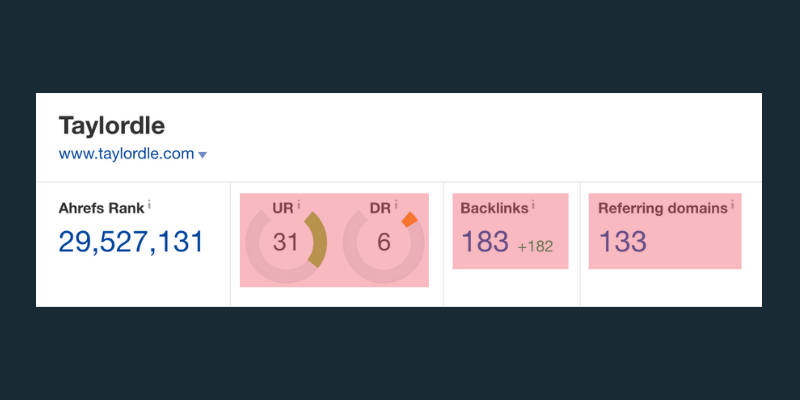 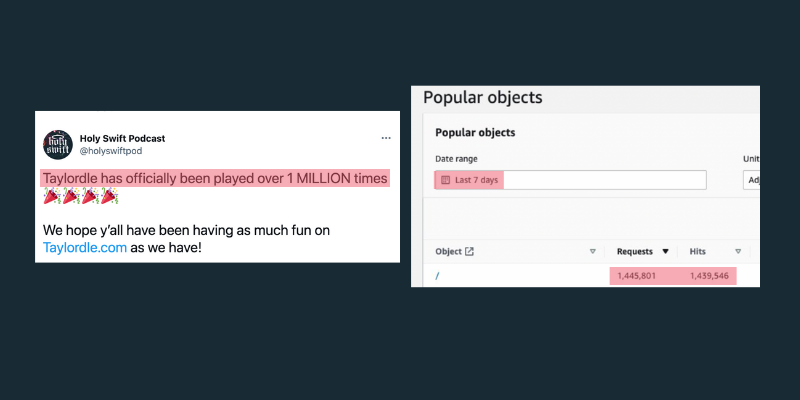 If that isn’t crazy enough, over 1.4 million, yes million visited the site and played the game!

And Finally The “Swift” Viral Loop

The first is the referral loop. 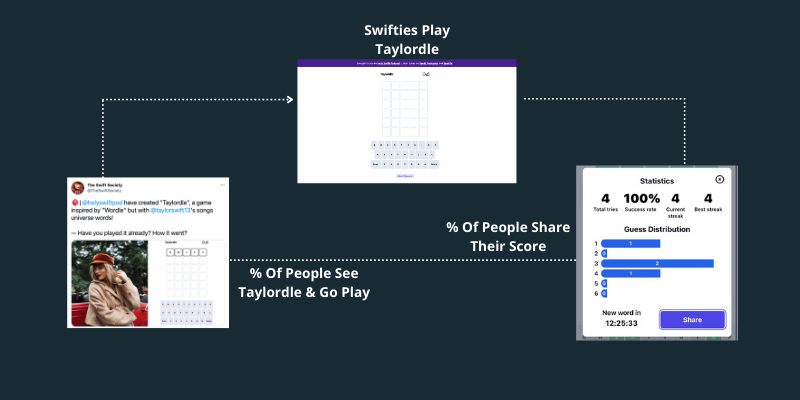 Secondly, is its acquisition loop. 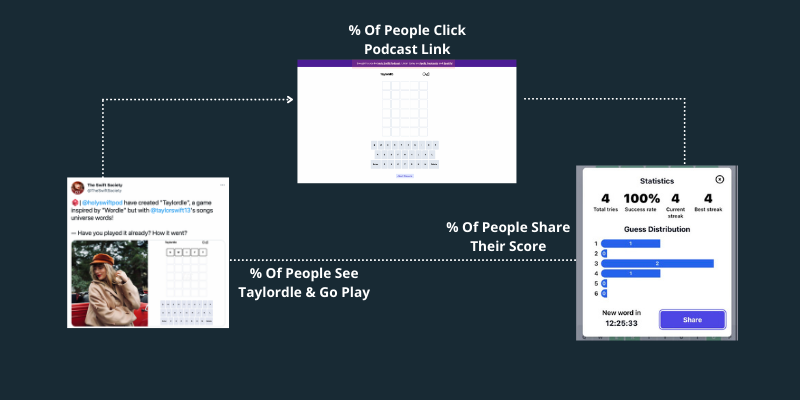 Every time someone plays Taylordle, at the top, there is a link promoting the Holy Swift Podcast.

And true creativity gets people to talk about you.

When you combine this creativity with cultural moments and relevance, you increase your virality chances.